The International Association of Jewish Genealogical Societies bestowed four awards for 2005, recognizing outstanding individual and organizational contributions to Jewish Genealogy. These awards were presented by Hal Bookbinder for the 2005 awards committee chairman, Sylvia Furshman Nusinov, during the banquet held in conjunction with the 25th IAJGS International Conference on Jewish Genealogy in Las Vegas, Thursday 14 July 2005.

IAJGS Lifetime Achievement Award: Susan King
Recognizing her twenty years of pioneering vision and leadership in making resources freely available to the worldwide Jewish genealogical community. Through her tireless devotion many thousands of people who might never have explored their Jewish roots have successfully done so, benefiting from the continually expanding array of online resources offered by JewishGen. She has changed the face of Jewish genealogy with a clear and focused goal of preserving our history for future generations.

Outstanding Contribution to Jewish Genealogy: Yad Vashem
Recognizing the unique and exceptional resources that is  the Central Database of Shoah Victims' Names. This database provides convenient worldwide access to information on millions of victims of the Shoah and so preserves their eternal memory while facilitating the documentation of additional victims.  Its easily searchable repository of digitized Pages of Testimony is an invaluable resource to researchers linking them both to the victims of the Shoah and to long-lost family members. The award was accepted in behalf of Yad Vashem by Gary Mokotoff. 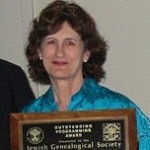 Outstanding Project Award: the Jewish Genealogical Society of Los Angeles
In recognition of a series of events and programs marking the society's 25th anniversary.

In 2004, JGSLA celebrated its 25th anniversary in several ways:

Award for Outstanding Publication by an IAJGS member Society: the Jewish Genealogical Society of Greater Philadelphia
Recognizing the excellence of Chronicles, its quarterly journal. With over two-thirds of its content original and authored by members, it is truly a publication by members for members. Its editorial philosophy stresses variety, combining Jewish history, culture, family stories and research techniques. Effective editing and graphic design add to the overall impact that it has made in the genealogical community scores of people remain remote members primarily to receive this fine publication. The award was accepted by Mark Halpern, society president.