Four awards for 2006, recognizing outstanding individual and organizational contributions to Jewish Genealogy. These awards were presented during the banquet held in conjunction with the 26th IAJGS International Conference on Jewish Genealogy at the Marriott Marquis, New York City, 17 August 2006. 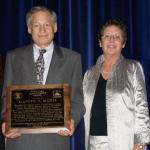 IAJGS Lifetime Achievement Award: Stephen P. Morse
"Recognizing his ongoing work to enhance access to online databases. His versatile 'One-Step' programs have become essential tools for thousands of Jewish genealogists. Thanks to his extraordinary skill and creativity, researchers have made critical discoveries in immigration, census, and vital records, as well as numerous other databases, and they have overcome hurdles presented by unfamiliar alphabets and languages. Extending his generosity beyond cyberspace, he has also lectured widely at conferences and to local societies, contributing to their growth and furthering learning."

Outstanding Contribution to Jewish Genealogy via the Internet, Print or Electronic Product: Ada Green
"Recognizing her devoted and meticulous efforts to record burials in Jewish cemeteries in the New York City area and beyond. Since 1995 she has documented over 180 burial society and landsmanshaft plots and has single-handedly cataloged over 36,000 gravestone inscriptions worldwide. She has made records accessible to all on JewishGen and has encouraged and guided individuals and groups undertaking other transcription projects. Her tireless work is a model to other volunteers and a mitzvah to the Jewish souls whose memories she has rescued from oblivion." 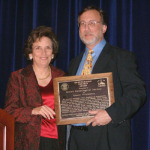 Outstanding Programming or Project that Advances the Objectives of Jewish Genealogy: the Jewish Genealogical Society of Greater Philadelphia
"For creating searchable online databases of Philadelphia's Blitzstein and Lipshutz "ethnic bank" records. These records detail steamship ticket purchases made in the United States, primarily for family members in the "old country." Previously available only in ledgers at the Philadelphia Jewish Archives Center and on microfilm, 55,000 records spanning 50 years of immigration to the port of Philadelphia are now accessible to researchers worldwide on JewishGen. For some, the records have provided the first written evidence of their ancestral towns."

Outstanding Publication by a Member Organization of IAJGS: the Jewish Genealogical Society of Greater Boston
"Recognizing the excellence of its quarterly journal MASS-POCHA which informs JGSGB members as well as readers worldwide. Notable features include the variety and originality of its articles, in-depth coverage of guest lectures and the unique resource lists that supplement many articles. A consistent and attractive layout, appealing graphic design, effective use of photographs and illustrations and high editorial standards further enhance the impact of this exemplary publication."