IAJGS Lifetime Achievement Award: Mathilde Tagger
"In recognition of her huge impact on the advancement of Sephardic Jewish genealogy, through her personal research, including translations, transliterations, and indexes; through the publication of her book Guidebook for Sephardic and Oriental Genealogical Sources in Israel; through her numerous scholarly publications; and through her unstinting personal assistance to individual researchers.."

Unable to attend the conference, Mathilde Tagger received the award in Israel from the Secretary of the Tel-Aviv Branch of the Israel Genealogical Society, Rose Feldman, who accepted the award at the banquet in her behalf. 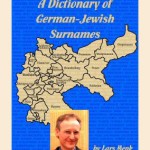 Outstanding Contribution to Jewish Genealogy via the Internet, Print or Electronic Product: Lars Menk
"In recognition of his book A Dictionary of German-Jewish Surnames, created as a remarkable act of love and dedication while choosing employment as a letter carrier in order to leave time for his meticulous research. Within a context of general demographic and historical information, the book documents 13,000 Jewish surnames from German-speaking regions of Europe, including the the dates and locations in which the names were recorded."

Lars Menk resides in Germany. His award was accepted by Gary Mokotoff, his publisher.