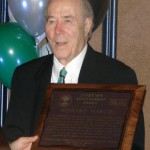 IAJGS Lifetime Achievement Award: Howard Margol
"In recognition of his pioneering work in Lithuanian Jewish Genealogy research, his personal efforts on behalf of Lithuanian record access and translation, and his many years of guiding genealogists back to their roots. The American Fund for Lithuanian-Latvian Jews, which Howard created, provides much needed help to the Jewish community of the Baltic States. He has served in many roles, including president of the JGS of Georgia, president of the IAJGS, and chair of the Litvak SIG..." 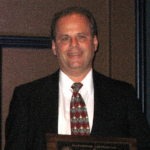 Outstanding Contribution to Jewish Genealogy: Steven Lasky
"In recognition of his original contribution to the Jewish genealogical community by the creation of an online virtual museum, The Museum of Family History. This impressive and professionally-produced body of work reflects his hard work and dedication in accumulating, recording and sharing an incredible variety of relevant resources. Designed to encourage Jewish families to research and document their own family histories, Steve's inspiration will continue to benefit future generations."

Outstanding Project: Petra Laidlaw
"For creating "The Jewish Community in Mid-19th Century Britain" database. Bringing together information from personal records and scores of published sources, more than 200 individuals have created a growing consolidated database of Jewish residents in Britain in 1851. This resource already includes more than half of Britain's mid-19th century Jewish population. It contains clear instructions and is readily accessible for both inquiry and update at the JGSGB website."

Outstanding Publication: The Jewish Genealogical Society of Great Britain
"For its collection of guidebooks comprising the "Jewish Ancestors?" series focusing on Jewish genealogical research in Europe, understanding Hebrew inscriptions and documents, and organizing family history records. This well-written and illustrated set of books contains an abundance of valuable information for family historians at all skill levels. Visually appealing, carefully edited, and professionally printed, the guidebooks clearly reflect the value JGSGB puts into both publishing for and educating Jewish researchers."