The IAJGS Achievement Awards were announced at the Gala of the 33th IAJGS International Conference on Jewish Genealogy in Boston, Massachusetts; on Thursday, August 08 by Renee Steinig, Chairman of the 2013 Awards Committee. The Committee also included Henry Blumberg, Logan Kleinwaks, Kahlile Mehr, and Mark Nicholls.

Lifetime Achievement Award: Neville Lamdan
The IAJGS honors Neville Lamdan for his pioneering work to establish the International Institute for Jewish Genealogy and Paul Jacobi Center in Jerusalem. His vision and dedication as its director from 2006 to 2012 shaped the IIJG into a driving force working to gain recognition of Jewish genealogy as an academic discipline. As a result of Dr. Lamdan's skilled leadership, the IIJG has developed syllabi and guidelines for university level courses in Jewish genealogy, sponsored scholarly research on Jewish genealogy, and been a presence at international Jewish Studies conferences. An innovator and bridge builder, Neville Lamdan has given Jewish genealogists new insights and tools and has underscored to the academic community the crucial role genealogical research has to play in the study of Jewish history and identity. 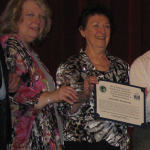 Outstanding Contribution to Jewish Genealogy via the Internet, Print or Electronic Product: JewishGen KehilaLinks
KehilaLinks has encouraged and assisted the creation of over 600 web pages commemorating the places where Jews have lived. The pages provide valuable information for each community, including maps, photographs, historical accounts, databases, links to other resources, and more. KehilaLinks pages also serve as a networking base for people interested in these ancestral communities. Introduced in 1996 as ShtetLinks, the project was renamed in 2011 to reflect its inclusion of Jewish communities throughout the world. KehilaLinks continues to grow thanks to the tireless efforts of coordinators Susana Leistner Bloch and Barbara Ellman; a team of volunteer webpage designers; and its many site owners. 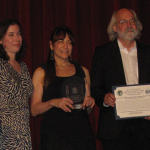 Outstanding Program or Project Award: Gesher Galicia, for its Cadastral Map & Landowner Records Project and the Gesher Galicia Map Room
The Gesher Galicia Cadastral Map and Landowner Records Project (from Left to right: Brooke Schreier Ganz, creator of the All Galicia Database and new website, Pamela Weisberger, president and research coordinator, and Jay Osborn, Gesher Galicia Map Room Coordinator) has provided groundbreaking content for genealogical researchers.Through the funding of Gesher Galicia and individual contributors, 19th century Austrian land maps and landowner records are copied at archives in Eastern Europe. These extraordinary maps, which show such details as market squares, houses, synagogues, cemeteries, roads, and rivers, enable family historians to visualize where and how their ancestors lived, and the landowner records too capture details of everyday lives not found in traditional sources. Maps are shared in Gesher Galicia's unique online Map Room, which also features historical town, provincial, and regional maps, Holocaust and ghetto maps, and specialty maps. Indexed data is made available to researchers in the free online All Galicia Database. In many cases these maps and records provide the only available documentary evidence of a family's life in a town.

Outstanding Publication by an IAJGS Member Association: Jewish Genealogical Society of Toronto, for its book, Tracing Our Roots, Telling Our Stories
Tracing Our Roots, Telling Our Stories, published by the JGS of Toronto in celebration of its 25th anniversary, shares family stories, first-person narratives, and accounts of research and discovery written by 44 of the Society's members. This 248-page anthology spans two centuries and diverse locations to explore such themes as immigration, the Holocaust, and life in Eastern Europe and in new homelands. Its moving chapters illustrate the importance of recording personal histories to enrich the details found on genealogical documents. Effective publicity and sales of the book in a number of retail outlets also serve to introduce the larger community to the joys and challenges of genealogical research.