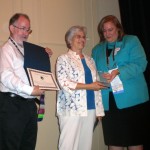 In recognition of his many significant contributions to the specialized science of the origins and forms of proper names and surnames of persons as applied to the field of Jewish genealogy, as well as, for the scholarly works that he has authored that have become over time, indispensable reference resources for genealogists and families who are researching their ancestors. Garri Regev received the award in Alexander's name. 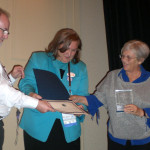 In recognition of the exemplary work of Mathilde Tagger, Billie Stein, and Rose Feldman as well as the numerous volunteers from the Israel Genealogical Society and the Israel Genealogy Research Association who created the database, transcribed and translated all five 19th century censuses which documents the Jewish population of Eretz Yisrael between 1839 and 1875.  This project enables the availability of Sir Moses Montefiore’s records to all genealogy researchers with roots in Ottoman Empire Palestine. 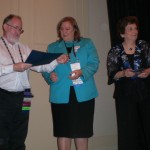 For excellent design, editing and original content of a quarterly Jewish genealogy newsletter.  Lineage stands out in effectively engaging the members of JGS Long Island to become more actively involved in their society as well as becoming better skilled in conducting their family research. 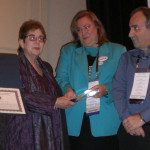 IAJGS Award for Outstanding Contribution to Jewish Genealogy via the Internet 2014:

JRI-Poland is recognized for providing since 1995 searchable on-line indices of Jewish records from current and former territories of Poland and for its recent ground breaking multi-year agreement with the Polish State Archives (PSA) in a massive effort to digitize all vital records in more than 30 regional archives.  This initiative will dramatically expand access to records for family historians tracing their Jewish roots to Poland and make them freely available online.