Salute! to Dorit Perry, Uri Sagi, and “Giving a Face to the Fallen” 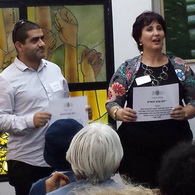 The "IAJGS Salutes! Committee" is pleased to announce that Dorit Perry, Uri Sagi, and "Giving a Face to the Fallen" have been awarded an IAJGS Salute! Award. IAJGS Salutes! are designed to provide recognition on an ongoing basis of noteworthy projects, activities, and accomplishments relating to Jewish genealogy at any time during the year in addition to the annual IAJGS achievement awards.

Using their genealogical skills, Dorit Perry and Uri Sagi have taken upon themselves to research, discover and write the family story of those fallen soldiers who had no surviving family in Israel to tell these soldiers' stories. "Giving a Face to the Fallen" was initiated in 2012 and currently has over 25 volunteers.

The Israel Defense Forces (IDF) maintains the "Izkor" website (www.izkor.gov.il) which is dedicated to memorialize those who have fallen in defense of the Jewish population in Israel since 1873. Each one of those that fell, have an individual page including a picture of that person. But there are those for which no photo or story was submitted, especially if they were new immigrants who came to Israel alone. "Giving a Face to the Fallen" has taken upon itself the goal to find information about those who have given their life for the defense of others.

At the beginning of the project, there were 861 names without biographical material and 500 without pictures. To date, Dorit, Uri and their team of volunteers have researched and succeed in finding information for 100 of these fallen. They have also succeeded in finding photographs for some of the 500 that had no picture on their page. The information is then given to the IDF to be placed on the memorial page on the Izkor website. The successful family research done by this group has also resulting in the replacement of tombstones that now include the names of the parents of the fallen.

For the extraordinary efforts of this group, their coordinators and volunteers, the IAJGS is happy to recognize the efforts of Dorit Perry, Uri Sagi, and "Giving a Face to the Fallen" with an IAJGS Salute! Award.