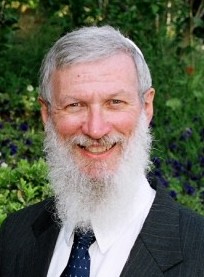 The “IAJGS Salute! Committee” is pleased to announce that Shalom Bronstein has been awarded an IAJGS Salute! Award. IAJGS Salutes are designed to provide recognition on an ongoing basis of noteworthy projects, activities and accomplishments relating to Jewish genealogy at any time during the year in addition to the annual IAJGS achievement awards.

Shalom Bronstein is a native of Philadelphia and graduated from both Temple University and Gratz College in 1964. He was ordained by the Jewish Theological Seminary in 1970 and served as a congregational rabbi for 16 years before coming on Aliyah in 1986. Together with his wife Frances they have five children, 13 grandchildren, and one great grandchild.

Some 30 years ago, he started translating articles in Yizkor Books for people he knew, which led to him to then doing it professionally. He states, “my most satisfying experience took place more than 20 years ago. I was able to provide the exact Yahrzeit dates for two Shoah survivors who had no idea when their fathers died.” By using the Arolsen material and other Yad Vashem resources, he was able to provide much family information for numerous people. Some did not know that their father or mother had been married before the War and had lost their spouse and children in the Shoah. He had many other satisfying discoveries for families.

As a member of the Israel Genealogy Research Association, he became involved as a member of the editorial board of Sharsheret Hadorot and program chairman for the IGS. In the 1990s, he was contacted by a researcher from the United States Holocaust Memorial Museum to work on their project of mounting an exhibit on the story of the SS St. Louis. He did the research in Israel and found much information that they did not have. He was asked by the director of the JDC Archives in Jerusalem to do research on and write biographical sketches of the staff members of the JDC who lost their lives in their service to the Jewish people. The information he gathered is now on permanent exhibit at the JDC headquarters in Jerusalem.

After completing this, he began a new project with Yocheved Klausner, who mentioned that volunteers were needed to transcribe necrology lists in Yizkor books from Hebrew and Yiddish to English. Since embarking on that project in 2011, he has worked on nearly 60 books, recording the names of more than 70,000 martyrs of our people.

Shalom was among the founding members of the Israel Genealogy Research Association, has volunteered to transcribe databases and translated the Burial Society information in Israel that appears on the IGRA website. In addition, Shalom has served for the past seven years as a genealogist on the team that meets with people researching their family history at the Genealogy Center of the National Library of Israel.

For his significant and continuing contributions to JewishGen’s Yizkor Book Project and other volunteering efforts for IGRA (Israel Genealogy Research Association), the IAJGS is happy to recognize Sholom Bronstein’s efforts with an IAJGS Salute! Award.